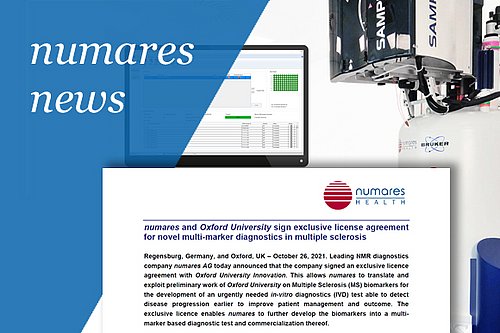 In about 85% of patients with MS, the disease initially takes a relapsing-remitting course. Most patients with "relapsing remitting multiple sclerosis (RRMS)" will eventually transition to "secondary progressive multiple sclerosis (SPMS)" with continuous worsening of symptoms. This transition occurs subtly and is difficult to define clinically, requiring retrospective evaluation of the disease course over the past 12 months. This delay in diagnosis prevents timely adoption of treatment regimens for effective patient management and improved long-term clinical outcomes.

The collaboration between Oxford University and numares began in 2017 with a common goal to validate a set of biomarkers, which had been previously identified by Oxford researchers, for detecting transition from RRMS to SPMS. This used clinical data acquired from a multi-centre cohort collected by Oxford’s partners.

"We are enthusiastic to enter the next phase of the collaboration and utilize Oxford's excellent preliminary scientific work and numares' expertise for the development of an MS IVD test based on the multi-marker approach," comments Volker Pfahlert, CEO of numares. "Our mission is to improve patient care by providing better diagnostic tools to help physicians better manage their patients. This fruitful collaboration with Oxford researchers gets us closer to our mutual goal to bring first class research to the bedside of MS patients."

Professor Daniel Anthony, Head of Experimental Neuropathology Laboratory, Department of Pharmacology at the University of Oxford and lead scientist on the project, adds:
"We are very pleased to have such an experienced industrial partner in numares to commercialize our research findings as a breakthrough test, which enables early detection of the transition from RRMS stage to SPMS stage for the first time. This will have a significant impact on the care of individuals living with MS. The test opens up the possibility to monitor the condition more closely and thus improve therapeutic decision making."

The IVD development will start in 2022. In early 2021, both parties also agreed to extend their partnership for another two years and expand the approach of multi-marker use in diagnostics to the field of Alzheimer's disease. 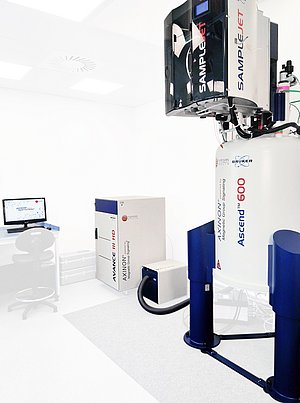 About Magnetic Group Signaling(MGS®)
Nuclear Magnetic Resonance (NMR) has been used as a research tool for determining the structure of chemical compounds for many years. However, in the past, this technology was too complex to be used in metabolomics-based medical research or routine diagnostics owing to technical limitations.
numares developed its proprietary Magnetic Group Signaling (MGS®) technology to enable NMR to answer demanding questions in metabolomics. With MGS®, important prerequisites like standardization and qualification can be fulfilled through technical processes and procedures. For the first time systematic processing and use of diagnostic information from metabolism is possible. Thanks to MGS®, numares’ in vitro diagnostic system (IVD) AXINON® is able to generate reliable and reproducible data of highest quality – independent of the NMR device or the user. This enables fully automated analysis of patient samples without any human intervention.

Oxford University Innovation is the research commercialisation arm of Oxford University, supporting innovation and entrepreneurial activities across all University Divisions. We are helping the University to create a world-leading innovation ecosystem with Oxford University at its heart.
OUI seeks partners for ideas and technology from Oxford, which we deploy through intellectual property licensing, spinout and social venture company formation, and material sales. We also provide access academic expertise for industry and other organisations through our Consulting Services team. We’re home to the OUI Startup Incubator supports members and alumni of the University who wish to start or grow startups, and have created over 50 such companies since 2011. We also work with investors through our New Venture Support & Funding team, which galvanises early-stage support for world-changing Oxford ideas.
In 2020/21, we created 31 new companies based on Oxford ideas (making Oxford the most prolific creator of university companies in the UK and the US), and saw over £1.1bn invested into our companies, making Oxford one of the most attractive locations for investors looking to change the world through impactful technology.
Oxford University Innovation is the highest university patent filer in the UK and is ranked 1st in the UK for university spinouts, having created over 270 new companies since 1988.
For updates on innovations from Oxford, follow Oxford University Innovation on LinkedIn and Twitter or subscribe at http://innovation.ox.ac.uk/about/contact-us/#enquiry

numares AG, based in Regensburg, Germany, is an innovative diagnostics company that applies machine learning to metabolomics and other biomarker data to develop advanced tests for high-throughput use in clinical diagnostics. The AXINON® System employs advanced nuclear magnetic resonance (NMR) spectroscopy to evaluate metabolic constellations. Magnetic Group Signaling (MGS®) is a proprietary technology that enables NMR for highly standardized and rapid throughput testing. Metabolic tests stand as an important pillar in precision medicine to address unmet needs in cardiovascular, kidney, liver, and neurological diseases. You will find more information at https://www.numares.com/ and on our social media channels: LinkedIn, Facebook, YouTube and Twitter.